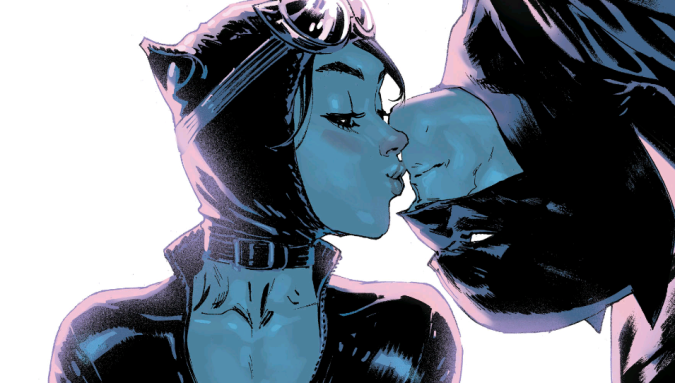 The Bat and the Cat.

Batman number 50 has come and gone. By now most everyone has probably seen the issue but regardless…

Yes the wedding did not go off as planned but then again that was spoiled ahead of time(thanks to the New York Times) and some fans lost their bloody minds.

The issue itself was wonderful. From King’s writing to Mikel Janin’s wonderful art to the pin ups from nearly every artist to ever draw the bat that fit so nicely into this issue. This was everything that you want from a 50th issue, ok except that no one said I do but we all knew that. The fact that it  was spoiled ahead of time did not  take away one moment of enjoyment. The story played out just as it should have been. The huge storybook wedding with a thousand guests was never going to happen. The Bat and the Cat would have had a spur of the moment private intimate  affair, just the two of them with the witnesses. And can I say Alfred was absolutely the right choice. Alfred has been there every step of the way in Bruce’s life to witness all the ups and all the horrific downs. He should absolutely have been there for the happiest day of his life.

Showing the dance that Bruce and Selina have always done was wonderful way to frame the story. This is not just the dance they’ve been doing for the last 50 issues but the dance they have done since Catwoman was first introduced(in Batman #1 in 1940) and I don’t believe for a second the dance is over. King has said this is a hundred issue story and I for one believe at some point we will get that wedding.

But by and large I am a journalist for all the spoiling that they did, they buried the lede.

Too often they focus on Bane’s physicality. Far too often we forget that Bane is brilliant. He has a great strategic mind that is how he broke Batman in the first place it wasn’t just Venom coursing through his veins, it was setting loose Arkham Asylum to wear Bruce down.

This time it’s not breaking him with his fists but breaking the man emotionally and the imagery in the last panel of all the different pieces of the last 50 issues culminating and being seeming victory that was perfect.

The last panel that’s the turn, the penny dropping. It was that moment that changes everything that came before.

I know everyone is diving back into their comics and just looking for the little hints spread throughout this run.

Here’s too another fifty.

It is time. Time for DC comics to give us a Booster Gold ongoing once again.

Actually it is well past time. Michael Jon Carter, that’s Booster, has been on the sidelines for far too long.

I firmly believe a title is on it’s way. Whether a solo book for Booster or every fans dream of a Blue and Gold team-up book(Ted Kord and Booster…is it really that hard). Moves by DC Comics seem to suggest it will happen.

First there was the recent team up with Superman in Action Comics written by Dan Jurgens. Jurgens is the man who created Booster in 1986. Then we have this week’s Batman #45. More a Booster Gold comic than a Batman comic it was weirdly fun. Which is a prerequisite for Mr Gold. Tom King who does excellent work everywhere seems to have Booster’s voice down perfectly.

Booster always tries to do what is right but tends to trip over his own feet getting there. This is the man responsible for making sure history happens the way it should (in between fart jokes and bantering with his robotic pal Skeets). Think of the WB show Legends of Tomorrow if it was one guy and much funnier.

He is the greatest hero the world never knew. It is time that we reminded them of that fact.

This column had roots in my previous column regarding the announcement of the ongoing series Grayson. It is nice to see how a series matches up against your own expectations.

Dick Grayson has always been one of my favorite characters in all of comics. I think part of it had to do with the fact that while he was coming of age and moving on from being the first Robin to becoming his own hero as Nightwing, I was going through my own teenage years and discovering who I was. Grayson always seemed to be the bridge between Superman and Batman, more human than one and much more compassionate than the other.

I looked forward to this series, feeling that it was a brilliant and much needed change for the character. I do have friends who simply long for the days when Dick will once again don the (blue and black)Nightwing suit once again.

The new series is written by Tim Seeley and Tom King. I had no familiarity with either writer going in, I was flying blind. In five issues they have rewarded my blind faith with an excellent series. Just enough spy action, paired nicely with great character beats. In short order they seem to know Dick Grayson, the man behind the hero. That is important. Yes these are comics but it is not all about the shiny suits. The men(and women) in those suits are what we come back for every month.

It does not stop with Grayson. They have created a fantastic supporting cast for him in short order. There is the far away shadow of Bruce sprinkled in as a lifeline to his former life but the key are his new partners so to speak.

The ‘Helena Bertinelli’ they have crafted along with artist Mikel Janin’s depiction of her, she is the definition of the seductive spy, has been outstanding. After seeing this version I would be happy to never see another version of the Huntress ever again. The experienced spy mentor for Dick, but you can see an almost envy for the way Dick still looks at the world without her cynical-worldview.

On the other hand we also have Midnighter as a rival, regular guest star. I love Midnighter and I am glad he is being used well since Stormwatch is over. It is easy to write his use off as taking the Batman role, but I do no believe it is that simple. As much as many of us see Nightwing as almost an equal to Bruce in some ways it will always be a teacher/student relationship. In Midnighter, Dick has a rival, contemporary who is his equal. He questions Grayson’s motives for doing what he does, much as Grayson does himself. Midnighter has faith in his abilities, in his powers but Dick has his resolve. I look forward to when they fight together rather than each other.

As I mentioned before Mikel Janin takes care of the art. I first discovered Janin on Justice League Dark, he quickly became on of my favorite artists. Here he is asked to do less, no mystical monsters or group scenes, but he does so much more. The characters come alive within these pages. When I see his Grayson I cannot imagine anyone else drawing him.

It has been a great ride so far and I look forward to the journey every month. For those looking for Nightwing, he is still here leaping into the unknown.

Grayson simply left the mask behind.