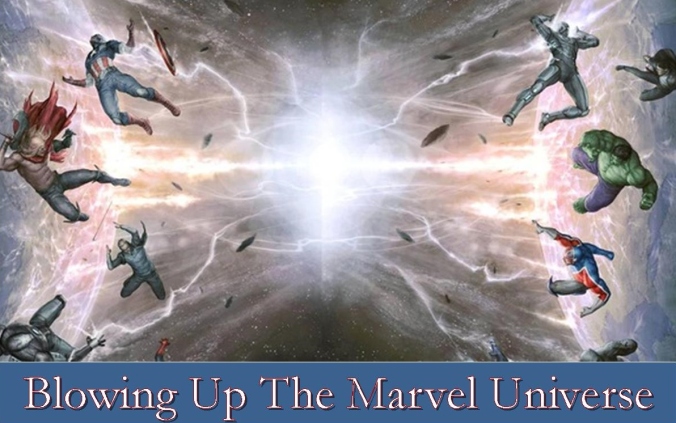 This is the second part of my column relating my own way of restarting the Marvel Universe, you can find the rest here
Putting a universe back together is a gargantuan task. While looking to the future you must respect the past. That brings us to week two:

The first family of the Marvel Universe returns-battered but still standing.

Some call him Lord and Master, others call him monster. For one and all he will forever be known as Doom.

He is a hero from another time, is this former soldier running out of time?

As Tony Stark struggles with guilt and self-doubt the Mandarin makes his return.

Natasha Romanov was not always a Super Hero, a fact that she is about to be reminded of…

He is the scientist, he is the Monster. For once he can be both at once. Watch out world.

The picture starts to come into focus as the 2nd issue of RISE arrives. Heroes begin to determine if there is a place for them in the world they failed, as new threats begin to gather. When taking things apart like this you cannot simply go back to the status quo. Things must change, decisions must be made as we enter week three. New heroes step up while the familiar faces find their way.

The sword is drawn…that sword is Excalibur. Kitty Pride brings Captain Britain, Nightcrawler and Rachel Summers back together to protect their world.

Kamala Khan is still discovering what it means to be Ms. Marvel and to be a hero

Justice, Speedball, Kid Nova, Spider-Girl, White Tiger and Reptil come together as the New Warriors. If the Avengers wont do their job then the Warriors will.

Carol Danvers remembers the previous Captain Marvel, she only hopes she can live up to that legacy.

Remy LeBeau is used to being the one stealing things, when an ancient treasure is stolen from the Thieves Guild Gambit must take action.

Kevin Green is the new hero Prime. He joins Ms. Marvel, Patriot, Hulkling and Kate Bishop as the New Marvels trying to find their way as heroes without a net.

With the Avengers and the X-men still nowhere to be found teams begin to form to fill the void as we enter the fourth week former allies come together once again.

Doctor Stephen Strange, Namor, the Silver Surfer and the Incredible Hulk come together once again to battle other worldly threats. How long will it last this time?

Captain America is an Avenger-no more. The Invaders are his team now. Joining him is Bucky Barnes, the Winter Soldier. Who else will answer their call?

The government-sponsored mutant team is back. But who exactly is the new team?

Black Bolt has returned when the InHumans need him most.

The end is within sight. A few more tweaks and we will have seen the Marvel Universe rise from its own ashes.

Hopefully in part three I can stick the landing.

One thought on “Blowing Up the Marvel Universe-part two”